Well, I finally did it! Although I'll still be doing some limited cross and sponsored posts here until my PR increases on the new spot, I've moved Sojourner's Place to her own domain. Yep! Sojourner's Place is now a dot com!

I welcome all Sojourners ~ new and regulars ~ to my new home. You can even enter the new Sojourner's Place through the Front Door over on Wordpress. Guess, you could say that I've been on a roll!

While the look and address has changed, the message has not. The "truth" is still spoken according to SjP.

sunday inspirations...when the master steps in

Not long ago, I heard a story about a five–year–old boy who loved the piano. Any time he got the chance, he would sit down and fiddle around on the keys. He never had lessons or formal training because he was told that he was too small or too young to play the piano. But in spite of those comments, he continued to practice and practice the only song he knew how to play, "Chopsticks."

One day, the boy's father surprised him with tickets to go to the symphony and hear a world–renowned Italian pianist. This man was one of the greatest pianists that had ever lived. The night of the concert arrived and as they walked to their seats, the little boy saw the beautiful grand piano on stage behind the curtain.

When no one was looking, he snuck over and sat down on the piano bench and began to play his elementary version of chopsticks. About that time, the curtain began to rise and the audience was prepared to see the world–famous, master pianist. Instead, they saw the little boy hunched over the keys playing "Chopsticks." The boy was so caught up in his world that he didn't even know anyone was watching. When he suddenly realized what was happening, he was petrified.

Just as he was about to get up and run for his life, two big arms reached around him and placed two big hands on the piano keys. It was the master pianist. He whispered in the little boy's ear, "Keep playing." As the little boy continued to play his simple rendition of "Chopsticks", this world–renown pianist began to play a Beethoven Symphony piece scored in the same cadence and key. Under the direction of the master, the rest of the orchestra came in.

First, he brought in the woodwinds, then the brass, then the percussion. The boy's father sat there with tears coming down his cheeks. He couldn't believe what he was experiencing. He never dreamed that simple tune he heard in his living room each day would become a beautifully orchestrated Beethoven symphony.

What was the difference? The master stepped in.

Sometimes in life, you may not feel like you have the talent, the wisdom, or the "know how." People may not see your desire or ability, but the good news is: God does. When you use what you have, the Master will step in. He'll put His hands on top of your hands. He'll take what you think is average–average gifts, average talent, average ability–and He'll turn your life into a masterpiece.

For we are God's masterpiece. He has created us anew in Christ Jesus, so we can do the good things He planned for us long ago (Ephesians 2:10, NLT.) 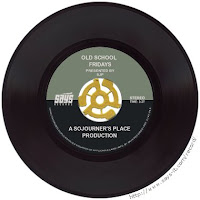 Oh Yeah! It's FRIDAY!!! And that means it's time for some old school jamming and par-taying in the blogosphere! This week's theme is "This is Dedicated To".

Now, I'm sure there will be many a love song - and maybe even some not so love songs - posted today as folks remember or pay tribute to the past or current loves of their lives. I admit, that I too thought about doing so and asked my Best Half what I should post. Expecting to hear a suggestion from him that expressed his "obama-type" love for me, he instead went all philosophical on me. Oh well, remember I told ya'll a while ago that we needed to have that second honeymoon. lol

So, with that inspiration failing, I remembered that today is my AKAversary. During the many, many, many weeks of working to get My Pearls, there were two cuts that will be forever ingrained in my mind. Now most will consider these two cuts pure jams back in the day, but I know some women for whom these they bring back different type of memories. In the days before exercising to music became popular, we all learned that What's Going On by Marvin Gaye had a particular type of beat that lended itself quite nicely to a "duck-walk". And then, as the semester quickly passed away, it seemed that it was "Just My (our) Imagination" that we would ever cross those "burning sands".

But, alas we did! So this OSF post is dedicated to my Sorors who share this special date with me. Skee-wee & Pinkies Up!

Mrs Grapevine and Ms. Marvalus are the creators of this bloggie meme. Click here for more info and join the fun.

Posted by SjP in calling all sojourners, justice for all, much obliged, trophy room 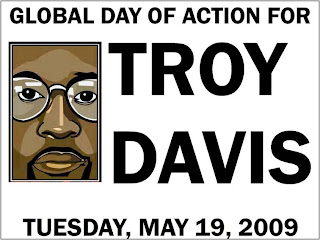 Much obliged to all Sojourner's who answered the call to action on behalf of Troy Davis on May 19. While I am very appreciative of your participation, the fact that our collective voices may stir the heart and soul of Gov. Perdue to grant clemency to a man who may well be innocent. As I wrote to AfroSpear members:

But, let us not forget that Troy is not the only one on death row in the states or throughout the world. There are those who are in favor of the death penalty and those who are not. But, everyone will agree that no individual should be put to death for a crime that he or she did not commit. On that fact we can and must all agree.

Many Sojourners answered this call to action and those who either provided me with a link to their posts or posts I found while sojourning the blogosphere are listed below. If your post link is not listed, please drop it in the comment section here and I will add it.

Global Day of Blogging for Action for Troy Davis Participants:

As simple words are just not adequate to show just how thankful I am to each of the bloggers listed here, I am passing on the Shades of Black and White Award to each of you. Tricia from The Girl Who Wears My Shoes, was inspired by Shirl the owner of the blog for which this award was name; and as such I am very humbled to have been among the first to receive this award directly from Shirl.

This award is passed along to deserving bloggers who are committed to bridge the gap of racism due to their passionate writing, their excellent communication skills, their courage to "put it out there" and because they truly care about the only race that matters, the human race.

In accordance with the "rules", participation is optional and you may pass on this award whether you display it or not. You may, however, pass it on to as few or as many bloggers you wish. If you do pass it on, just link to the person who sent it to you as well to those you pass it on to. Pass the award not only to bloggers who write primarily about racism, but to bloggers who have written insightful posts on the subject as well.

wordless wednesday...chicago, have you seen me?

Posted by SjP in {meme} black and missing wordless wednesdays