look! up in the sky!

Posted by SjP in i sing american 2 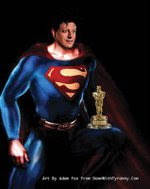 ...strange visitors from another generation and time who came to America with powers and abilities far beyond the popular vote. SuperDelegates, who can change the course of the democratic process, overturn the will of the people with a single vote; and who, disguised as leaders in the Democratic Party, members of Congress, governors, Speaker of the House, former presidential candidates, and Senate Majority Leader, fight the ever ending battle of waffling, riding the fence, to put McCain in the White House.

In "combing" the web, I've tried to find the real "history and rationale" of the Democratic Party's Electoral College known as the Super Delegate. Of course, it's not easy to do so - because very few folks really want to scribe about the debacle known as the 1968 Democratic National Convention in Chicago (Viet Nam, Chicago Seven, the Weathermen, etc) or the sordid maneuver used to ensure that Kennedy would not get the 1980 nomination against incumbent Jimmy Carter - hence the onslaught of the Reagan Years. So, to connect the dots - you have to know the reported history and then remember (for those of us who can) or read about the origins of the SuperDelegate in the Democratic Party.

After the 68 Convention, from which Humphrey emerged as the nominee largely due - I believe -to Bobby Kennedy's assassination, the DNC made changes in its delegate selection process. This change was based on McGovern-Fraser Commission in an effort to change the composition of the convention with less control by party leaders and more responsive to the votes cast during the campaign for the nomination. But, the leadership didn't like that because they - guess what - believed that these changes had unduly diminished the role of party leaders and elected officials which weakened the tickets of McGovern and Carter. So, they changed the rules.

So, in 1982, the SuperDelegate was created by a commission chaired by former North Carolina Governor Jim Hunt. Implemented in 1984, SuperDelegates accounted for only 14% of the "electorate". Today, the SuperDelegates account for nearly 20% (that's Wikipedia talking here -cause by my calculation they account for over 40% - but math has never been my strong suit) thus, having the real ability and capability to "wheel and deal" with our vote regardless of the will of the people!

First they were only state party chairs, vice chairs, governors, big city mayors, and democratic members of Congress who were allowed up to 60% of its membership to fill the remaining seats. In 1984 only state party chair and vice chairs were guaranteed SuperDelegate status. Four years later, Congress was allowed 80% of its membership (wonder how much the population grew between 84 and 88 or anticipated to grow by the 1990 census). Oh yeah, ALL DNC members and ALL Democratic governors were automatically given SuperDelegate status. And if that wasn't enough, they gave the benign Distinguished Party Leader status (Super SuperDelegate) to former DNC chairs (added 1996), Senate minority leaders (added 2000), and then in 1996, ALL Democratic members of Congress were given Super Delegate status. Hell, I might even be a SuperDelegate!

O.K, so we now have 842 SuperDelegates. A total of 2024 pledged and unpledged real delegates and SuperDelegates is needed to get the nomination. Now when I do the calculation (math's not my strong suit, remember) it looks to me like the SuperDelegates' vote counts for 40% of the total necessary to win the nomination. Surely, not what Du Bois had in mind when talking about the "Talented 10th".

Obliged to you for hearing me, and now old Sojourner('s Place) ain't got nothing more to say.

look! up in the sky!
https://sojournersplace.blogspot.com/2008/03/look-up-in-sky.html

look! up in the sky!
https://sojournersplace.blogspot.com/2008/03/look-up-in-sky.html
This entry was posted at Monday, March 31, 2008 and is filed under i sing american 2 . You can follow any responses to this entry through the .