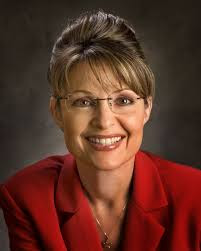 How in the world did we all miss the selection of Sarah Palin as John McCain's VEEP pick? This went over all of our heads and for the life of me, I don't know how or why. I'm telling you that SOMETHING JUST AIN'T RIGHT! SOMETHING IS VERY ROTTEN IN DENMARK - or shall I say Alaska.

Like everyone else, I am very surprised with the news that Alaskan Governor Palin was selected. I was sure it would be Romney. I was hoping that it would be Romney. Anyway, I intended this to be a post on Palin's gubernatorial race. Her platform. Her interests and passions related to the political arena in Alaska. So sure that I would be able to find out more about her in this regard, I Googled "Sarah Palin runs for Governor". BINGO! The following link popped up: http://www.palinforgovernor.com/.

What I found even more puzzling, after clicking through nearly 100 Google pages referencing Governor Palin, it became very clear that there has been and overt campaign throughout the blogosphere to draft Palin for the VEEP slot. Blog upon blog, internet media upon internet media, have been calling for this appointment since at least May of last year. Check a few here, here, here, here, here, and here.

I ask you: How did Palin's selection fly so far under the radar when it was as plain as the nose on all of our faces? This was a clear and calculated move by McCain. And while, I believed that this was a decision McCain made on his own, I don't believe that anymore. He might not know anything about the internet - but his staffers sure do. And donned as "the most popular governor in the US"! Oh now, something just ain't right with this picture.

So, I still don't know anymore than Sarah Palin now than I knew when I decided the topic of this post. Sure, I've heard what everyone else has heard about this gun-toking, NRA card carrying, mother of 5, and former Pat Buchanan supporter - but nothing else. Well, that's not exactly true because I know she p*ssed me that while lauding over Hillary and Geraldine, she failed to mention that Shirley Chisholm also made history in her vie for the executive office.

But considering that she hasn't paid much attention to Iraq - I don't know why I would think that she would know or acknowledge history.

sarah palin: something just ain't right!
https://sojournersplace.blogspot.com/2008/08/speak-truth-obliged-to-you-for-hearing.html
This entry was posted at Saturday, August 30, 2008 and is filed under c'mon now, menu favorite, politically speaking . You can follow any responses to this entry through the .

Sing it loud. Sing it clear!

Your post was spot on. However, even though she doesn't have much experience, she still has some skeletons in her closet that the media hasn't missed earlier and I suspect they'll start to broadcast in the next couple of days.

A legislative panel has launched a $100,000 investigation to determine if Palin dismissed Alaska's public safety commissioner because he would not fire the trooper, Mike Wooten. Wooten went through a messy divorce from Palin's sister.

Although Walt Monegan, the former public safety commissioner, does not go so far as to say that Governor Palin urged him to fire Mike Wooten, the Anchorage Daily News and other legitimate news sources report that he accused members of her administration and immediate family as doing the deed. In fact, Attorney General Talis Colberg's conducted an investigation and found that 14 members of the Palin administration — including Colberg himself — made calls to Department of Public Safety officials about Wooten.

In one of those calls, Frank Bailey, director boards and commissions, was tape-recorded as saying: "Todd and Sarah are scratching their heads, why on earth hasn't, why is this guy still representing the department?"

It seems that by selecting Palin, McCain may have embroiled his campaign with previously hushed whispers of Palin corruption. I’m reminded of the children’s nursery rhyme that says:

Wow!! I had no idea that she was being looked at so long ago. Though I have heard some serious conspiracy theories that Bush wanted her to be picked because he wants McCain to lose and for the Rep. party to make a huge bid in four years.

@ S.A. Hart, I'd heard about the investigation but you have shed much more light on the information that is surely to come out on Gov. Palin. Yep! Something is definetely rotten! Hope we find out before November!

*******
Much obliged for stopping by SjP's. Don't be a stranger the doors are always open here.

I am going to take a wait and see...my initial reaction was "Ooh, what a gift!" But you know the Repubs are slick as devils, so I know there is something up there sleeves and this choice is calculated and well planned...they don't do anything off the cuff.

I still think it will backfire, but again, we will wait and see...

something in the milk ain't right! how in the heck was she getting VP talk over a year ago when she'd been governor of a state with THREE electoral votes for less than a year?!?

the twenty-four hour news cycle will soon break what's been going on... no doubt!

this point of view is so interesting, i've linked to this blog entry at plezWorld.

Sure, I've heard what everyone else has heard about this gun-toking, NRA card carrying, mother of 5, and former Pat Buchanan supporter

Her association with Pat Bucanan should really be investigated. We have a tendency to laugh at the religious right however they hold a great deal of power in this society. Were it not for their endorsements Reagan, Bush Sr and Bush Jr would never have been president. Something stinks.

Rumors have grown like an uncontainable wildfire overnight as to whether Gov. Palin is Trig's biological mother or grandmother. Watch this video filmed on 2/20/08 of the governor "hiking" to work. Trig was born less than 2 months later. Governor Palin's a liar