Posted by SjP in afrospear, calling all sojourners, i sing american 2, justice for all, menu favorite 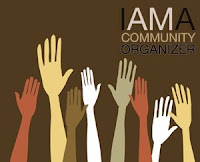 In a Country whose very foundation was built on community activism, seems strange to have to justify its importance and impact. Yet, on this 8th day of September in the year 2008, we find ourselves having to do just that.

Why is it necessary? It is necessary because our Nation - or at least a segment of our nation - has forgotten the ideals on which this Nation was founded: E unum pluribus...Out of Many One. They have forgotten, or see no significance, in community-based movements that have changed our Nation and our World. Whether it be HIV/AIDS or Apartheid in South Africa or genocide in Darfur or Voting Rights, community organizers have played an integral part and had significant impact these issues and instigated change. To discount the significance and importance of Community Organizers, is to discount the significance and importance of what it means and is to be American.

It is for this reason, that Sojourner's Place has joined with other AfroSpear and Afrosphere on this Day of Blogging for Justice in support, recognition, and gratefulness for the work and dedication of those who have made life better for us all. Those who are "just" Community Organizers.

day of blogging for justice: community organizers
https://sojournersplace.blogspot.com/2008/09/day-of-blogging-for-justice-community.html
This entry was posted at Monday, September 08, 2008 and is filed under afrospear, calling all sojourners, i sing american 2, justice for all, menu favorite . You can follow any responses to this entry through the .

Very cool... thanks for the heads up. Didn't even know this was coming, but just blogged about this song of hope... that really is in praise of community organizers... and I guess today's the day.

A message of hope for the week...
Daughtry's message: What about now

I've added your post to the list that I'm maintaining on my blog. It is amazing to see how much resentment surfaced from the remarks of Rudy and Sarah at the RepConvention...

Awesome post! And an AWESOME cause! I hope that the McCain/Palin people are reading and forwarding all of today's posts!
I am not on the list but I did jump in with my 2 cents! Take a look when you get a chance!
Blessings!

Here's my letter to Gov. Palin from daddyBstrong.blogspot.com

"The history of America has been largely created by the deeds of its working people and their organizations. Nor has this contribution been confined to raising wages and bettering work conditions; it has been fundamental to almost every effort to extend and strengthen our democracy."
--William Cahn, labor historian
"Human progress is neither automatic nor inevitable... Every step toward the goal of justice requires sacrifice, suffering, and struggle; the tireless exertions and passionate concern of dedicated individuals."
--Dr. Martin Luther King Jr.

Last week, at the Republican convention, you chided the democrat's presidential candidate for president Barack Obama for having been a community organizer. You said it was a position with no real responsibilities. But the daddy is writing to tell you three things only a politician working for the rich and a politician attempting to score points to get into office like Palin would make such an ignorant, anti-progressive comment.

Let's be clear: what you really said is that Barack, a graduate of one of the best law schools in the country, an individual who turned down a lucrative income from numerous prestigious law firms to organize unemployed steel workers and the poor in public housing on the South side of Chicago, had no responsibilities and was engaged in work of little, if any, importance. But in your attempt to demean Obama, you did something more: you revealed your vast ignorance of the immense and invaluable role that community organizers played and continue to play in the development of this country. Clearly, you have little or no knowledge of abolitionists like William Lloyd Garrison and Frederick Douglas, Harriet Tubman and Sojourner Truth helped get rid of slavery; union leaders like John Lewis who got rid of child
labor and gave us health benefits and retirement packages,
overtime pay other benefits; the Betty Friedans, Gloria Steinams and Ida B. Wells who organized so you, a woman, could get the right to vote; the Dr. Kings, Ella Mae Bakers, Bayard Rustins and Fannie Lou Hamers who were beaten and jailed but helped rid this country of apartheid in the southern part of the United States; the Cesar Chavezes who fought and continue to fight to bring the discrimination and brutal treatment of farm workers out of the shadows and to give them full economic and human rights.

But your ignorance and insensitivity to community work and its importance in the development of this country is not the worst thing. Worst of all is its utter insult to the black Americans. After all, it is Black Americans who have had to organize and fight continuously and so long to achieve rights and respect that most white Americans take for granted. Indeed, one could argue that it is this struggle, this community work, that is our greatest legacy and our greatest gift in this country. Therefore, in insulting Obama's community work, you, in essence, insulted the historical legacy of an oppressed people who he represents and a struggle that is shared by so many, a struggle that has, at last, gotten this country to a point where the son of a single mother who used food stamps was nominated the presidential candidate for a major party in the United States.

Besides reading up on your American history, there's only one other way for you to atone for your reckless and ill-informed remarks: apologize to Mr. Obama, his family and the American people for demeaning a history of community work that has made this such a great country.

Mac Walton, aka. the daddy

Much obliged to all stopping by SjP's today to help bring awareness and focus to the accomplishments and importance of Community Organizers in our society. I only hope and pray that today's efforts will not fall on the deaf ears of those who wish to minimize these efforts. Afterall where would we be without them - probably still enslaved and singing God Save the Queen.

Great, great post.
"Why is it necessary? It is necessary because our Nation - or at least a segment of our nation - has forgotten the ideals on which this Nation was founded: E unum pluribus...Out of Many One."

This says it all for me. Great job.

Keep on blowing the trumpet, my sista!!
{raised fist in the air}

@ Regina
I will hop over and see what you've posted!

@ Mac
We MUST get married very soon! (smiles)

Well spoken, straight to the point ... you better Preach!

Great blog and a fantastic move of a "Day of Blogging for Justice: Community Organizers". Shame on Palin and Giulliani for dumping on such an American as apple pie tradition! Community Organizers have been at the leading edge for change and justice in this country.

It is extremely important that Community Organizers combine their efforts (independent of race or religion) for the next two months and demonstrate their effectiveness and importance in the American Community by playing a pivotal role in defeating the party of McCain/Palin (which belittled and insulted them) and elect Barack Obama (Biden) President of the United States of America.

View more comments on Community Organizers for Obama on my blog at:
http://my.barackobama.com/page/community/blog/hillaryiteforobama