i just got one question... 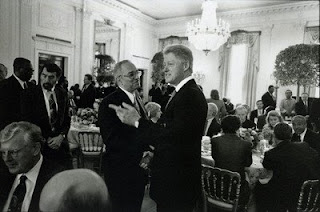 O.K., so we've all seen this picture of Bill and Rev. Wright during the White House Breakfast...and no doubt we all agree with Donna Brazile's reminder to the Clinton's that Rev. Wright did not abandon them in their time of need during the Lewinski, Starr and impeachment days...and of course, the Clintons rightly indicated that he's (Bill) has taken thousands of pictures with people...but tell me this:

How in the world could someone as vile and despicable as Rev. Wright is made out to be get cleared to attend the White House Breakfast in the first place?
Having attended one of the Democratic Debates as a volunteer, let me tell you that we all had to go thru all kind of security clearances before being approved to volunteer. And the "suits" were watching us like hawks in the Spin Room where some of the candidates talked to reporters.

So, given the fact that anyone having audience (large or small) with the President of the United States has cleared, is it a stretch to believe that NO ONE can even PRAY with the President at the White House Breakfast without a special invitation. Certainly each minister, priest, rabbi, etc. that receives such an invitation has been check out not only for his/her politics but also his/her theology. And now, the Clintons want everyone to believe that they are surprised and have had no formal or informal support - solicited or nonsolicited- from Rev. Wright? I think not! It's one of those things like Arsenio says "kinda makes you say hmmm".
Wonder what would have happened if Rev. Wright was a Clinton supporter...hmmm.

Obliged to you for hearing me, and now old Sojourner('s Place) ain't got nothing more to say.

SjP
i just got one question...
https://sojournersplace.blogspot.com/2008/03/i-just-got-one-question.html

i just got one question...
https://sojournersplace.blogspot.com/2008/03/i-just-got-one-question.html
This entry was posted at Friday, March 28, 2008 and is filed under menu favorite, politically speaking . You can follow any responses to this entry through the .

"Wonder what would have happened if Rev. Wright was a Clinton supporter...hmmm."

Which is the whole point of this foolishness.....Which I wish someone would just go on and put out there point blank...Which you did. Gracias.

LOL Sojourners, this wasn't a photo op with someone that they didn't know whom they just took a random picture with.

Wright was a vetted invited guest; who they wanted in their company.; end of stoy.

But stop making sense. You can't expect the American public to think, or the media to be honest.

Yobachi - :>)...but the dots are not that hard to connect...kind of like letting China send toys over here with lead to pay off our debt...DUH!

Notice how HRC didn't say anything about Rev. Wright until after she had lied about her Bosnia trip? She needed something to divert the attention away from her...

And I agree with Yobachi...it is a daily fight to continue making sense in this world of made up stories and inconsistent media blah-blah-blah...

I heard that!!! Just found a very interesting post regarding HRC's religious affiliations! Pretty shocking...bout to write about it!
SjP

I love beating up an old rug when it is dirty. This one is so dirty, so much so that I wanted to post it on my blog in the I need a bath section.

The Clinton's were once a set of politicians that I respected and admired to a certain extent. All admiration has gone out the window at this point.

The rug is beating itself up with the lies and BS. America can be stronger but it has to face itself in the mirror if we are ever going to see change.

Kem: I know exactly how you feel! Looking in that mirror is hard to do when you've lived your life thinking that you're the fairest in the land...and then the mirror finally tells the truth and reveals all of the ugly, ugly, secrets...SjP

Allow me to ramble just a moment adding my final thought to the mirror.

SJP; at this point in time I have come to realize the capacity of the human mind being used at a rate farless than 10%. Even if theylook in the mirror they end up turning away because they don't like what they see, so they just walk away convincing themselves to be something other then what appeared in the mirror.

America needs to be honest with what it sees in the mirror.

Kem-you can always "ramble" here! You're right, America has a history of turning away from the reflection in the mirror and this is certainly no different. SjP

Hadn't thought of the clearance thing...very interesting. And the Reverend wasn't just invited ("sit here in the back and don't say a word")...he's all up on the Commander in Chief. Some folk aren't just "fair"...they're fair-weather-friends.

The head Clinton( on some days), is
up in front, out in the open, with the I love your politics and preaching, butt kissing, one hand washed the other type of greeting. Heck inviting the man to the handshake is a salutation of the highest level, subliminally speaking of course.

I guess as of late, that hand( wrights) has been washing Barack's, so they must say to the good old reverend, we will burn you and your parishioner( Barack) by any means necessary.

I need to post this picture in my side bar. Is that ok? I want to spread the word. Also I want to link to your post in the side bar and allow this post some exposure.

Asheselah:...yes it is...but that's what "they" bank on that we won't connect the dots...or that we're too stupid to do so. That's why the explanation of taking pictures with thousands of people sounded so plausible. But NO WAY could Wright have been all up on :>) the Commander and Chief if he wasn't considered a real friend of Team Clinton! Thanks for stopping by...come back again! http://sojournersplace.blogspot.com/2008/03/thanks-for-visiting-sjps.html

Kem:couldn't agree more! That's Team Clinton's way...Yes, go ahead and use the picture...I got from my reference post and there's no copyright. SjP

It is a pleasure and your favor is not in the realm of obligation. I appreciate it and quite frankly you made my life easier.

If ever require my services do stop in and ask.

Actually it is great to be apart of this no matter how small or large the scale much importance has taken place in these comments that stemmed from an important post.

Keep up the good work. Soldiers for cause always prevail.

Kem: thanks much for the encouragement and your comments...I'm trying as I'm really new to this. Based on this post - maybe I'm doing something right:>). I'm going to do all I can to keep it real! Thanks for the offer...will do! SjP