am i not human? wanted ahmad haran & ali kushayb for crimes against humanity

Posted by SjP in {question} am i not human, afrospear, calling all sojourners, justice for all 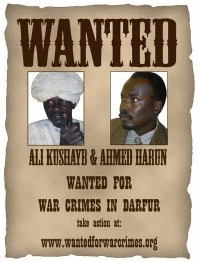 Ahmad Harun is currently Minister of State for Humanitarian Affairs of Sudan. From 2003 to 2005 he was Minister of State for the Interior. In this capacity he was in charge of the management of the “Darfur Security desk” and coordinated the different bodies of the government involved in the counter-insurgency, including the police, the armed forces, the National Security and Intelligence Service.

Ali Kushayb was an important leader of the Janjawid militia and a member of the Popular Defence Force. He was the aqid al-uqada (“colonel of colonels”) in the Wadi Salih locality of West Darfur. By mid-2003 he allegedly commanded thousands of Janjawid militia.

After 20 months of investigation, the International Criminal Court formally charged Ahmad Harun and Ali Kushayb for crimes against humanity and war crimes. In the February 2007 indictment, the Prosecution concluded that reasonable grounds to believe that Ahmad Muhammad HARUN and Ali Muhammad Ali ABD-AL-RAHMAN (better-known as Ali KUSHAYB) bear criminal responsibility in relation to 51 counts of alleged crimes against humanity and war crimes.

In reaching this decision, the Prosecution conducted interviews with Darfurian victims and witnesses. For their protection, victim and witness interviews were conducted outside of Darfur in 17 countries resulting in nearly 100 statements. The Prosecution stated: It is interesting to remark that many findings were consistent with findings by the UN Commission of Inquiry. We reviewed a report by the Minister of Defence of the Sudan and obtained information from high Sudanese officials.

The ICC evidence concludes that Harun and Kushayb acted together, and with others, with the common purpose of attacking the civilian populations of the village of Kodoom, and the towns of Bindisi, Mukjar, and Arawala in West Darfur between August 2003 and March 2004.

Our evidence shows that they committed crimes against humanity and war crimes including: Rape and other form of sexual violence; murder; persecution; torture; forcible transfer; destruction of property; pillaging; inhumane acts; outrage upon personal dignity; and severe deprivation of liberty.

Although the 2005 Rome Statute, UN Security Council Resolution 1593, requires Sudan to cooperate fully with the Court and provide any necessary assistance to the ICC and its Prosecutor the Sudanese Government has refused publicly to surrender either Ali Kushayb or Ahmad Harun to the Court.

THE CALL TO ACT:

Ahmad Harun and Ali Kushayb are wanted for trial at the ICC to establish their guilt or innocence concerning multiple counts of crimes against humanity and war crimes.

Please write to the United Nations Security Council, urging it to:

Obliged to you for hearing me, and now old Sojourner('s Place) ain't got nothing more to say. ~~SjP


am i not human? wanted ahmad haran & ali kushayb for crimes against humanity
https://sojournersplace.blogspot.com/2008/05/am-i-not-human-wanted-ahmad-haran-ali.html

am i not human? wanted ahmad haran & ali kushayb for crimes against humanity
https://sojournersplace.blogspot.com/2008/05/am-i-not-human-wanted-ahmad-haran-ali.html
This entry was posted at Tuesday, May 27, 2008 and is filed under {question} am i not human, afrospear, calling all sojourners, justice for all . You can follow any responses to this entry through the .

I just did that early this morning, Amnesty International sent me so info

I am glad I was able to receive this information on the situation in Darfur. Unfortunately it is nearly impossible for a people to be subdued by conquerors without the assistance of their own kind. Africa is notorious for having unstable governments and crooked leaders.

However, 99% of the time, the true driving force behind this continent's suffering comes from those who are not among the native inhabitants. Although history books claim otherwise, the "scramble for Africa" never ended.

Heads up - if you have not, you should google the following documentary and watch it online. the name of it is "The Esoteric Agenda"

Dulce - much obliged for the head's up.

Africa is not called the "Motherland" for nothing. And like all mothers our days of full of woe. Yet, we continue to hope and pray that our children would but learn from our mistakes as well as our struggles.

Thanks for posting this important info.

Much Respect. Thankyou for sharing such an excellent post.

Much obliged, very much obliged to all! Sojourner's Place will continue to join other collective voices to bring focus and prayerfully end Man's Inhumanity to Man.

This was very informative!

I am attempting to focus on The Congo as well as Darfur.

My blog has an initiative to encourage bloggers to identify corporate predators. It is the CATCH A CORPORATE PREDATOR INITIATIVE with a list of corporations to investigate. You are invited to be involved, if you'd like!