Now I must admit that when I heard the William Peterson was leaving the original CSI cast, I was shocked and more than a little dismayed. I like him and especially his bowed legs!

But, news hot off the wire reports that Laurence Fishburne will play a college lecturer and former pathologist who is focused on why people commit acts of violence. And just like Gil, Fishburne's character also has an interesting twist. Gil had a deep connection to bugs, and Fishburne's character has a deep connection to his work, having a genetic profile has been identified in serial killers. Now, this I got to see at least once cause I'm really not too sure that I like the implication here, so I'll hold judgement until the Fall. 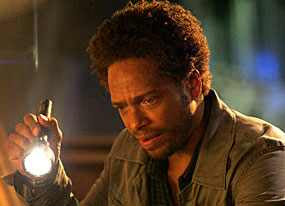 And what about Warrick Brown, played by Gary Dourdan. Although I missed the season finale, my Aunt says that it appeared that Brown was shot in the head right at the end, and therefore presumed dead. Seems that Dourdan is moving on. Good-bye Warrick...Hello Fishburne...Now that's all I got to say about that!

fishburne joining "csi" las vegas
https://sojournersplace.blogspot.com/2008/08/fishburne-joining-csi-las-vegas.html
This entry was posted at Monday, August 18, 2008 and is filed under 'bout sjp 'nem, miscellaneous matters . You can follow any responses to this entry through the .

Is going to TV still considered a step down?

I thought it was, CSI is a good show but I perfer Fishburne on the big screen.

Must say that I am shocked that he would agree to do a TV series...we'll see...

I thought Sir Laurence deemed himself too good for TV!
I stopped watching CSI a long time ago, it got kind of boring, and I must say the inclusion of Fishburn is not at all changing my mind...
I may watch one just to check it out before I bad mouth it!!!

The idea of watching a show vetered around death is depressing, but I did watch CSI because of Gary Dourdin.

Rumor has it, his death was left ambiguous due to his alledged drug problem. So he may return should he get his act together.

I have something for you at the castle...Perfect Blend of Friendship

I'm not a CSI fan and I have no interest in dead people; however, I do admire Mr. Fishburne's talent and for that reason only...will I take a peek.